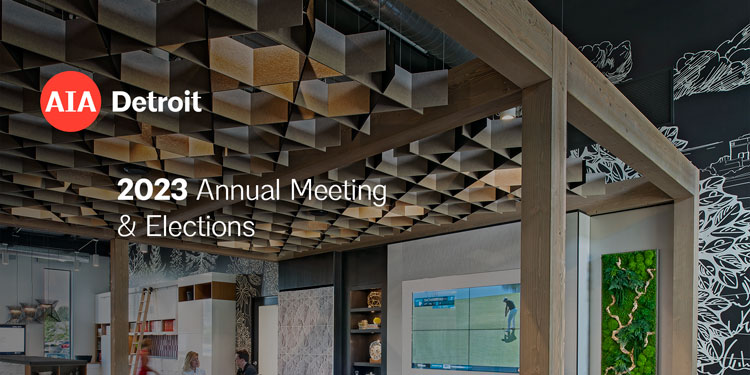 Please join the AIA Detroit Board and membership at our 2022 Annual Meeting, taking place on Tuesday, November 15th, at the American Interiors office in Novi, beginning at 6:00pm.

This meeting will include the annual report to the membership and the election of the 2023 AIA Detroit Board of Directors. We will discuss what the AIA Detroit Board has been working on internally this year, reveal our new Strategic Plan, and reflect on how that will affect the direction of the organization going forward.

Food and beverages will be provided. We hope you will attend!

The Annual Meeting is one of the few times throughout the year that AIA Detroit can reflect on our progress and discuss the future of the organization with our members.

Those unable to attend the 2022 Annual Meeting may request an absentee ballot by emailing elections@aiadetroit.com with your name and AIA Member number by Nov 14, 5pm. Absentee ballots must be completed by 12:00pm on November 15th. (You must be an AIA Detroit Member in good standing to vote)

RSVP Here for the 2022 Annual Meeting

GET TO KNOW THIS YEAR’S SLATE OF CANDIDATES… END_OF_DOCUMENT_TOKEN_TO_BE_REPLACED 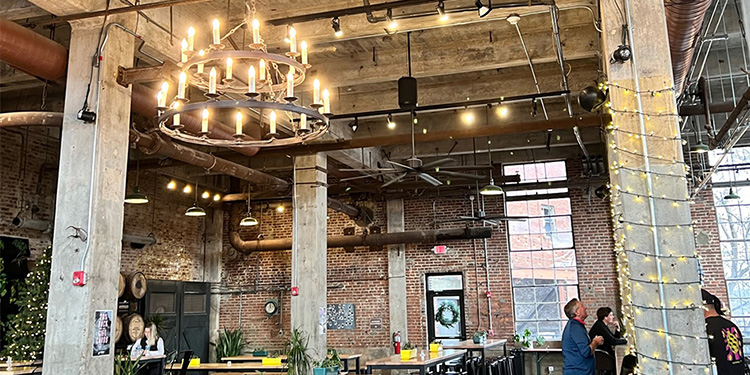 The Frosty Morn meat packing factory in Clarksville, Tenn.—all 52,600 square feet of it—has sat vacant since 1977. “Nobody’s ever spent any money to keep the roof up,” says John Hilborn, City Project Manager at the City of Clarksville. “When it rains, it rains as much inside the building as it does outside.”

In its heyday, the Frosty Morn plant was a major employer in northern Tennessee. City officials think that, with the right renovations, the building has the potential to return to its former role as an anchor of the community—this time housing local businesses.

“The way that Clarksville is growing, that area has not evolved with the areas around it,” says Pam Powell, AIA, of the vicinity surrounding Frosty Morn. “It’s in an under-developed neighborhood, really. I think it’s a perfect location for being a catalyst for change for the people that live there.”

The building’s iconic smokestack—torn down in 2020 amid safety concerns—has a chance at rising again thanks to the 2022 Mayors Innovative Design Cohort, a partnership between the Mayors Innovation Project and The American Institute of Architects’ Blueprint for Better campaign that will revitalize Frosty Morn and two other underused sites around the country. Blueprint for Better targets mayors and civic leaders to work with architects to transform their towns into sustainable, resilient, equitable communities.

AIA Middle Tennessee is in the process of shepherding revitalization of the Frosty Morn building for the city of Clarkesville, helping city officials understand what is possible through tours of similar former industrial structures that have been repurposed, like the Neuhoff Meat Packing Plant in Nashville.

Clarksville’s Frosty Morn is in good company. In Eastpointe, Mich., members of AIA Detroit helped reimagine a former parking lot as an outdoor market and event space, and in Blacksburg, Va., the Cooks Cleaners dry-cleaning shop will be renovated—with the help of AIA Blue Ridge—into usable retail space. END_OF_DOCUMENT_TOKEN_TO_BE_REPLACED 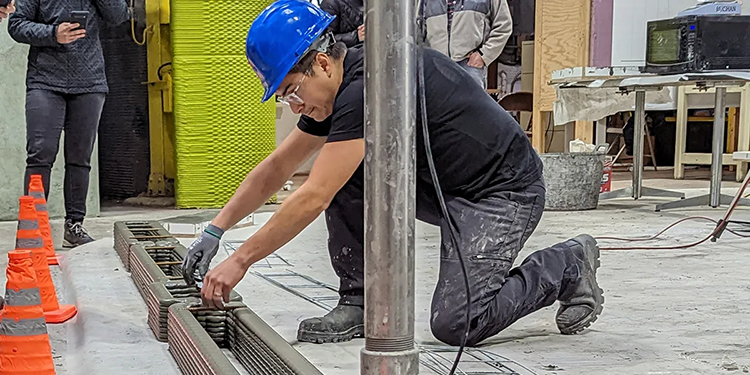 The nonprofit Citizen Robotics began the work Tuesday in its warehouse in southwest Detroit. The house, also expected to be the first in the state of Michigan, will be built in sections and later assembled in the Islandview neighborhood on the city’s southeast side.

The single-story, two-bedroom house will be 850 square feet and marketed to low-income individuals earning 80% of the area median income – which is about $50,240 for a two-person household in Detroit.

Tom Woodman, executive director of Citizen Robotics, said if cities, states, and construction companies don’t begin to invest in the technology that makes building this home possible, “our housing stock will continue to decline.”

“Then the cost of housing will continue to go up and we’ll no longer be able to afford to live in vibrant walkable communities,” Woodman said.

A shift toward 3D-printed homes can help fill two of Detroit’s needs: more affordable housing units and making use of this city’s wide swaths of vacant land – about 19 square miles, according to Detroit Future City. Woodman told BridgeDetroit in April that he chose Detroit for the project because the city is “striving for solutions.”

Citizen Robotics also has other 3D-printed home projects planned for Flint and Grosse Pointe Woods. One of the benefits, Woodman said, is that 3D-printed homes are expected to need much less energy to heat and cool than a house made with conventional construction.

“That’s not only better for the future homeowners’ budget, it’s also more sustainable for the planet,” he said.

The structure of the home is expected to be done by the end of the year. The entire project, designed by Bryan Cook of Develop Architecture, who also is president of the Detroit chapter of the National Organization of Minority Architects, is expected to be fully complete in spring 2023.

Cook watched the printing robot Tuesday as it put down the first layers of concrete for one of the walls of the home and said “there’s still a lot of work to go.”

“But it feels really good to be standing here and actually like to see that it’s going up,” Cook said. “It’s happening so I’m just very proud and excited.”

Detroit City Councilman Coleman A. Young II recently requested an analysis from the council’s legal and policy staff on the prospect of a pilot program to build 3D houses in the city’s most impoverished neighborhoods. He was seeking input from Detroit’s Housing and Revitalization Department and evaluating if the city could acquire a 3D printer and what it would cost.

The entire project in Detroit will cost about $230,000, according to Evelyn Woodman, the co-founder of Citizen Robotics, which is paying for some of the construction costs.

The Michigan State Housing Development Authority (MSHDA) is covering the remaining $150,000. MSHDA officials have said the 3D house in Detroit will serve as a “proof of concept project” to help the state determine whether 3D home building is sustainable, cost-effective and energy efficient.

Last summer, Gov. Gretchen Whitmer joined with Detroit Mayor Mike Duggan and Citizen Robotics at the nonprofit’s warehouse to announce the state’s plan to invest $100 million in federal COVID-19 relief funding toward the construction of thousands of affordable homes statewide.

The first full 3D printed home in the country was unveiled at Austin’s South by Southwest conference in 2018, according to a city policy brief. 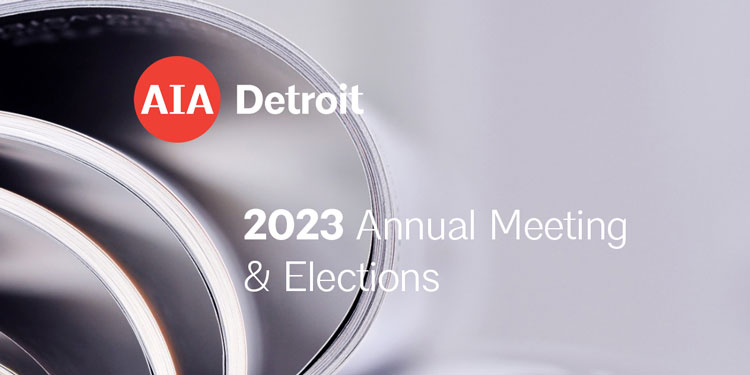 All current AIA Detroit Members are encouraged to save the date for the AIA Detroit Annual Business Meeting taking place on Tuesday, November 15th.  This meeting will include the annual report to the membership on milestones, events, and activity throughout the past year, and the election of the 2023 AIA Detroit Board of Directors.

Please send in your nominations for the 2023 AIA Detroit Board of Directors. Nominees must be AIA Detroit members in good standing.  Board Member duties will include governance, membership, and financial responsibilities (including sponsorship). The AIA Detroit Board meetings are not currently guaranteed to meet in person every month.

Please send nominations for the 2023 AIA Detroit board to elections@aiadetroit.com. Nominations are due by 5pm on FRIDAY, OCTOBER 14th.

2023 Board of Directors
Open positions and Certified Candidates

The Building Enclosure Council of Greater Detroit is electing a new Director to serve on their board!