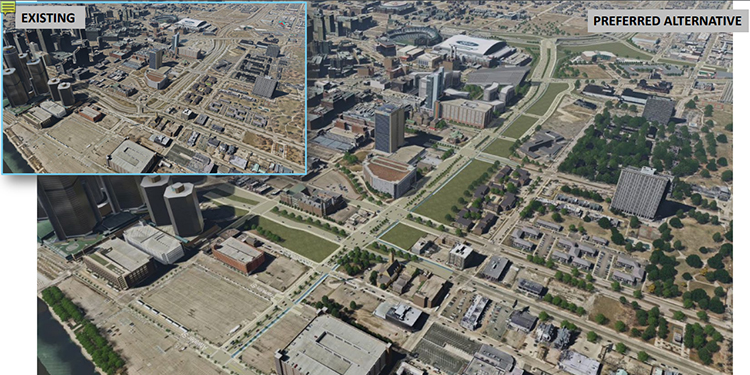 State to replace I-375 in Detroit with ‘urban boulevard’

The design phase will begin this spring and follows a review by the Michigan Department of Transportation that found there was no significant environmental impact for the project at the site that decimated prominent Black neighborhoods when it was built in the early 1960s.

The Democratic governor, who took office in 2019, noted her administration’s investment of $4.75 billion in fixing up 13,000 miles of roadway and 900 bridges. As the work continues, she said, “We must take a closer look at the unjust legacy of so many of our freeways.”

“This includes I-375, which paved through two prosperous Black neighborhoods decades ago, displacing 130,000 people, hundreds of small businesses, churches, and more,” Whitmer said in a statement. “Now, we must build up our state’s infrastructure with equity at the core.

“While we cannot change the past, we must work harder to build a more just future, and that starts with listening to and engaging with the community, and taking deliberate steps to get this done right,” Whitmer said.

I-375 was built more than 50 years ago. During construction, the prominent Black neighborhoods of Black Bottom and Paradise Valley were demolished to make way for the four-lane sunken freeway.

Constructed through a thriving Hasting Street, I-375 opened in 1964 and created a barrier between the central business district in Detroit and the neighborhoods to the east. It resulted in decades of underinvestment and a lack of opportunity for the predominantly Black communities on the other side of the freeway.

“As development has pushed east from downtown and west from Lafayette Park, the barrier that I-375 represents in our city has become even more apparent,” Detroit Mayor Mike Duggan said. “Removing the freeway ditch and replacing it with a street-level boulevard will unlock enormous development opportunities.”

The equity of who participates in the development opportunities from the upcoming project, Duggan said, “will be just as important as how the new boulevard ultimately will look.”

The milestone in the project comes after years of working through issues and concerns from community members, noted MDOT Director Paul C. Ajegba.

State Sen. Stephanie Chang, D-Detroit, said she is hopeful that the community engagement process associated with the project will uplift the needs and desires of the community. The Lafayette Park resident said part of the focus should be on connectivity, sustainability, and green space, not commercial or residential development that is “out of reach financially” for many Detroiters.

Extensive research began in 2014 to identify alternatives for the corridor including cost-effective transportation. The final design will be drafted with input from a community advisory committee.

The street-level boulevard is proposed to begin south of the I-75 interchange and continue to the Detroit River and provide connections to the riverfront, Eastern Market and Brush Park as well as create a new local connector street from Eastern Market to Gratiot Avenue.