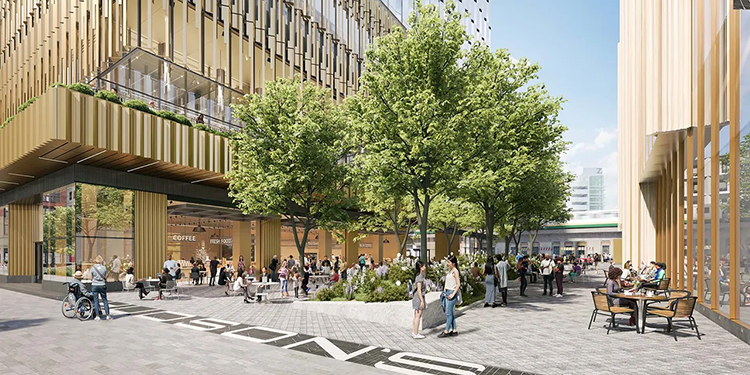 Dan Gilbert’s real estate firm has released updated renderings of what its ambitious Hudson’s site development will look like once construction finishes in a few years.

The images were recently shared on the project’s website at Hudsonssitedetroit.com

The development, 1208 Woodward Ave. downtown, broke ground in December 2017 and is still under construction.

The project consists of two buildings: a skyscraper with luxury residences and a luxury hotel, and an 11-story mid-rise with more than 550,000 square feet of office space, exhibition space and ground-floor retail, according to the website.

The buildings are expected to be done in 2024, two years behind the project’s originally announced timeline.

On Wednesday, city officials approved a variance for the skyscraper’s upper-level floorplates, which Bedrock representatives said was needed because the tower’s floorplates will get increasingly smaller at higher levels.

Bedrock has yet to announce how many floors the skyscraper will have, although building permits last year put it at 49 floors and 680 feet in height. Early on, the tower was planned to soar 912 feet tall — overshadowing the 727-foot-tall Renaissance Center — but plans were downsized.

Bedrock has yet to announce the hotel brand. The Free Press reported last fall on the possibility of an ultra-luxury Edition Hotel in the skyscraper, and Crain’s Detroit, citing an anonymous source, recently reported that Edition Hotels last year signed an agreement for the site.

The Hudson’s site was once home to the massive J.L. Hudson department store, which closed in 1983 and was imploded in 1998.

Categories: Uncategorized
Back to News