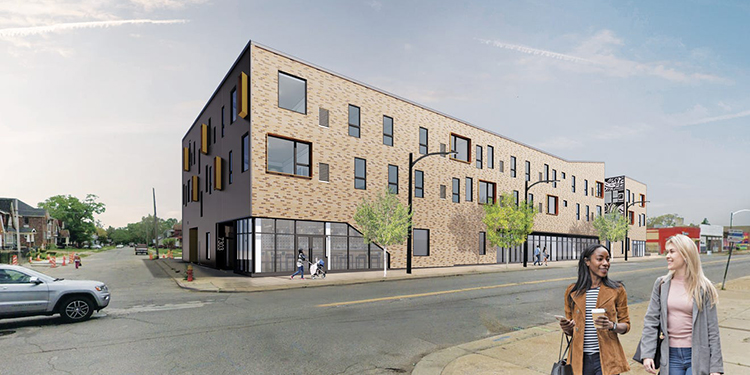 Developers celebrated Tuesday the groundbreaking of a $10.8 million apartment building on Detroit’s west side.

The 38-unit Sawyer Art Apartments at 7303 W. McNichols is expected to open in mid to late 2023, officials said. The development sits in Detroit’s Live6 community and is part of the city’s Strategic Neighborhood Fund initiative.

“The Sawyer Art Apartments is a great example of Detroiters rebuilding Detroit in a way that is affordable for the residents who stayed in this community,” Mayor Mike Duggan said in a statement Tuesday. “This is a development team from Detroit that is truly community-focused. This new development will build on the energy and revitalization we have been witnessing along McNichols since we completed our streetscape project this fall.”

The development is entirely Black-led, with developers Roderick Hardamon, George R. N’Namdi and Richard Hosey at the hem. It is partly funded by Invest Detroit and Capital Impact Partners through the SNF initiative.

“The Sawyer Art Apartments is an example of the type of catalytic projects that are needed and possible throughout the neighborhood in Detroit,” said Hardamon, CEO of URGE Development Group. “These projects are challenging and need the collective support of the city, state, private financing and foundation support. But when done right, the impact cannot be understated.”

The building is named after Detroit artist Tylonn Sawyer, who will create art on the exterior of the building. Sawyer’s painting “White on White: Stone Mountain” was the first work the Detroit Institute of Arts acquired this year for its permanent collection from its African-American Art Acquisition Fund established in 2020.

The building will feature eight studios, 17 one-bedrooms and 13 two-bedroom units. All of the units will be affordable housing with rates set based on 60%-80% of the area median income, officials said. The building’s 6,186 square-feet of retail space will be available at reduced rates to appeal to small-business entrepreneurs.

The groundbreaking follows the completion of the $7 million McNichols streetscape makeover, also part of the Strategic Neighborhood Fund.